Can You Put Eggshells in the Garbage Disposal?

Garbage disposal and drainpipes are a vulnerable part of your house that requires some extra care. While garbage disposals make your work in the kitchen easier, they can also cause additional hectic work if not used properly.

When you are spending money on buying disposal, you ought to spend some time knowing what you can and cannot throw down the drain. Certain objects can kill the performance of your disposal and can cost you a lot on the repairing or replacement process.

Hence, it is advised to use the disposal with great care and be sure of whatever you throw into it.

Different Opinions on Putting Eggshells in The Garbage Disposal 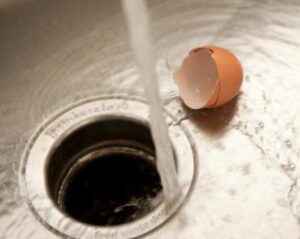 There has always been a debate whether eggshells can or cannot go down the disposal. Let’s see what some different opinions on this topic are:

According to some people, there is nothing wrong with putting eggshells down the drain. They also claim that washing down your garbage disposal with eggshells sharpen the blades and enhances the performance. Whereas in practice it is not known to be effective.

The other half of people believe that putting eggshells down the drain can severely damage the disposal’s performance. The reason given is that the eggshell has a membrane that is sticky, the sticky membrane can stick to the disposal and cause clogging.

Another reason is that the eggshell when ground, turns into small sand-like particles, these particles stick to the rest of the waste in the disposal and causes the blockage of drainpipes.

As for some manufacturers, it is mentioned that stuff including bones and eggshells are safe to be disposed of in garbage disposal. While others clearly mention to not throw the eggshells down the disposal as it can cause blockage in drainpipes. While some companies say nothing about eggshells in their user manuals.

Additionally, the water waste associations, that have to deal with the waste in the water, do not recommend eggshells being thrown in the drain since it can cause severe problems in the drainage system.

Things to Know If You Put Eggshells in Waste Disposal 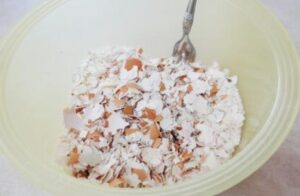 It is highly recommended to not put eggshells down the disposal. But if not in the disposal, then where do they go? the smell might be a concern when you dispose of them in the trash can, they can also be composed but if that’s not your thing then what to do?

Eggshells can ruin the performance of the disposal drastically, hence it is recommended to be careful with them.

If you still wish to throw the eggshells down the disposal there are two ways to you ensure it does not jam or clog.

How to Unclog the Eggshells Stuck in The Disposal?

Ways you can unclog disposal from eggshells are:

Snaking is the method used to clear any large pieces stuck that cause the jamming. You can use the plumber’s snake to try your luck. You can start by introducing the snake from the drainpipes and letting it go as far it goes. With the handle, you can move the snake back and forth to remove any easy clogs.

If you are fortunate enough then uninstalling and cleaning the drainpipes thoroughly might solve the problem for you. Remove the P pipe and Trap arm to see for any clogging there.

Make sure to clean them thoroughly before putting them back on. If there were any eggshells stuck in these pipes it will be cleaned out and solve the problem.

It is not advised to throw chemicals down the drain as it can harm the drainpipes, but in case you do not wish to get the plumbers help, you can use a homemade mixture of acidic compounds to wash out and dissolve the eggshells stuck in your drainpipes.

You can use a homemade mixture of vinegar, salt, and lemon couple of times to wash the drain. There are also chemicals available on the market, but it is better to refrain from using them.

What Can Eggshells Be Used for Instead of Throwing Out?

Eggs are cooked often in most households, for breakfast or for lunch. The best way of maintaining eggshells is to not throw them in the trash can. They can be composed in various ways to make maximum use of the eggshells.

You can use the eggshells in your garden instead of tossing them in the trash. After you have crushed them into small fine pieces, scatter them around in your garden to rid of all types of pests and slugs.

While you might not believe it, eggshells help in fertilizing the soil. The eggshell has a high level of calcium which can help by keeping the fruits or vegetables you grow from rotting. Once the eggshells are cleaned and washed, spread them out into the soil. It drastically helps in boosting the quality of the soil. 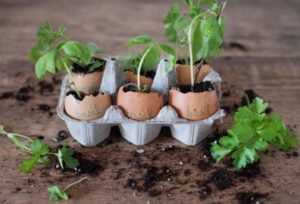 Seedlings are preferred to be grown in eggshells. Once you have washed and dried up the eggshells, poke a small hole with a needle at the bottom, fill it up with soil and add the seed. As it grows, the eggshell breaks providing nutrients to the plant. If you wish it can be transferred as it is to a bigger pot or whatever desired location is.

Just when you think the uses of eggshells are done and over with. Then comes another. You can use the eggshells to make cleaning solutions with which you can clean cooking utensils and tough stains on sink and bathtubs.

The procedure is simple, wash and dry the eggshells. Dry them out on a sheet or put them on low heat in an oven for a while. The shells should be soft enough to be crushed by hands. Grind the eggshells, mix it with baking soda and you are done!

Are eggshells good for garbage disposal?

While some people might suggest that eggshells are good for cleaning garbage disposals; they are not. They can stick inside the disposer and clog over time. Even if you throw the eggshells after finely crushing them, it can still stick to the rest of the waste and block the entire drainpipes.

Some people think the organic part of the membrane of the egg, washes and enhances the performance of the disposal. While the fact is, eggshells do nothing of that sort. They do not sharpen the disposal blades instead harm them.

Each appliance in your house has a limit to how you can and cannot use it. Abusing a device with what it cannot take ruins its performance and causes a heavy toll on your budget.

Garbage disposal is a sensitive machine and should be used with proper care. If your problem is disposal not lasting long enough, you should consider the things you are throwing down the drain.

Similarly, eggshells are one of those things that should not go down the drain, while it might seem like a good and easy idea at that time, trust us when we say there are better ways to utilize eggshells, and you’d be much happier in seeing the result after composting them.