Best Way to Get Rid of Garbage Disposal Odor

Garbage disposal is a convenient appliance that eliminates waste in your kitchen and keeps the sink tidy and clean. However, continual use of this appliance can lead to foul odors. The unpleasant odors emanate from spoiled food and bacteria accumulated over time in the bowels of the disposal. 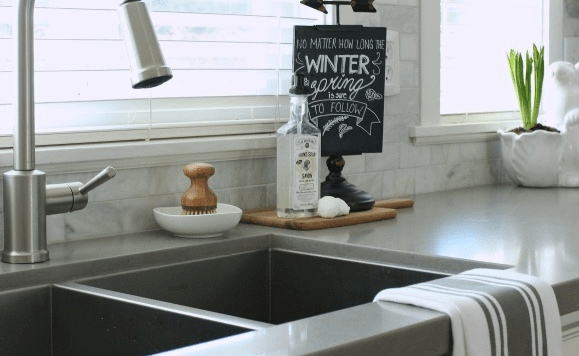 Ice cubes are one of the best ways to get rid of garbage disposal odor. To remove the bad smell, run cold water into your sink and fill the disposal with ice cubes. The ice freezes the stuck dirt and helps it removed from the blades. Ice also sharpens the grinding blade of the garbage disposal.

Another best way of getting rid of the disposal odor is by removing big pieces of the debris that may stick on the drain pipe. Large debris can clog and rot in the pipe, resulting in a lousy smell after some time. Also, objects like forks and spoons that get into the disposal can trap some food waste that rots, leading to foul smell. You should remove any object that is stuck in disposal and the accumulated waste.

First, you should turn off the system to prevent hurting your hand with the grinding blades. You then use a light source to check out of any stuck object and use pliers to remove. Lastly, you rinse the garbage disposal with clean water to remove any accumulated debris that may be causing the smell.

Citrus fruits, especially lemons, are useful in getting rid of garbage disposal odor. They are good at maintaining the pipes clean and improving the smell emitted from the inside. You cut the fruits into small pieces and drop them into the garbage disposal when it is running.

The fruits’ rough peels will help clean the blades and the disposal walls while the resulting juice will replace the odor with a pleasant fragrance of citrus scent. However, you should ensure that you use small pieces to prevent damaging the appliance blades.

Wait for about one hour, turn on the system, and run cold water. The bad odor will disappear by the end of the process with the evaporation of vinegar smell. However, this method should not be used too often regardless of its excellent results because vinegar is acidic and can damage the disposals rubber parts if used regularly.

You can use mild bleach to eliminate garbage disposal odor efficiently. Pour down the bleach into the disposal and run cold water, and it will get rid of the smell. The bleach also dislodges food waste that may be stuck in the pipes, causing clogging resulting in foul smell occurrence.

You should repeat this process at least once per month as it is an effective way of cleaning the system and preventing lousy odor coming from the inside. You can also dip a scrub brush in the detergent and clean the visible parts of the disposal. Concentrate mostly on the joint between the disposal rim and the sink because that is the place that traps tiny particles causing the growth of molds.

Improperly rinsed food wastes may stick and harden onto your pipes, resulting in odor. The remedy, in this case, is deep cleaning your garbage disposal using a rubber test cap.

First, you run hot water into the faucet for about one minute. You then use a wrench to disconnect the pipe that connects the appliance to the sink. Connect the rubber test cap with the underside of the pipe to avoid water from running through it, allowing you to soak it with a cleaner. Run warm water down through your garbage disposal until it reaches the peak of the drain.

You then add a half-cup of bleach and leave it to sit for at least one hour. Once the bleach has soaked enough, detach the rubber test cap, allowing the solution to drain into the bucket you placed beneath the pipe. Finally, reconnect the pipe, and your garbage disposal will be odorless.

1. Can I prevent garbage disposal odors?

Yes. Garbage disposals start stinking when food sits on the pipes. You can prevent this by flushing hot water down the pipe every time you use your garbage disposal. You should run hot water through the sink for about 30 to 40 seconds to push any food waste that remains through the pipes so that they don’t rot and start to stink.

Also, always turn on the disposal every time you put food waste and then rinse with warm water because if you don’t turn it on, the food waste will be smelly. By doing this, you will prevent the occurrence of foul garbage disposal odor.

2. Can I clean my garbage disposal to remove the odor?

Yes. Garbage disposal odor comes from food build-up on the splash guard over time. Cleaning it removes the waste, thus getting rid of the odor.

Garbage disposal odor is one of the worst things that can happen in your kitchen. The odor is mainly caused by food particles that get trapped on the appliance drainpipe underneath the blades and sides. This waste creates a conducive environment for bacteria and molds to grow to produce unpleasant odors.

Regular cleaning of the garbage disposal with one of the above methods will help in keeping it odor-free. It is advisable to run water whenever you are using it to help maintain it clean and germ-free.